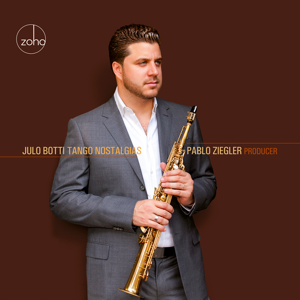 Julio Botti’s ZOHO Music debut introduces a fresh new voice to the nuevo tango movement pioneered decades ago by Astor Piazzolla and Pablo Ziegler, Piazzolla’s longtime pianist and a prolific composer and producer in his own right. For this coming out party for the young Argentinian saxophonist, an instrument not normally associated with tango music, Ziegler has re-arranged some of his most potent compositions specifically with Botti’s soaring soprano horn in mind.

With a majority of the tracks having been recorded in Buenos Aires using Ziegler’s regular trio of Quique Sinesi on guitar, Walter Castro on bandoneon and the maestro himself on piano, augmented by Horacio Hurtado on acoustic bass and Quintino Cinalli on percussion and drums, Tango Nostalgias stands as Botti’s auspicious Stateside debut. It’s a bold step in a new direction for the young saxophonist who had been courting the jazz muse earlier in his career. By embracing his Argentinian roots, Botti has in effect found his own voice on his chosen instrument.

Back to Music
Previous Album Next Album