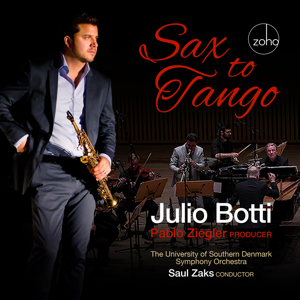 Their new project, Sax To Tango, is far more ambitious in the scope of its arrangements and orchestration. It features The University of Southern Denmark Symphony Orchestra under the baton of Argentine conductor Saul Zaks in a selection of nine iconic Astor Piazzolla nuevo tangos, one Tango standard, and three compositions by Pablo Ziegler. The recording sessions for this album were scheduled in connection with a live concert of this material on June 9 and 10, 2015.

Back to Music
Previous Album Next Album