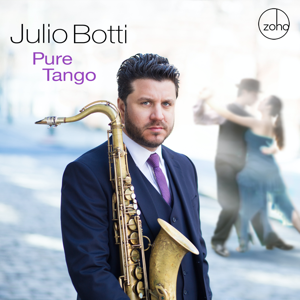 In late 2017, maestro Julio Botti was introduced to pianist Matias Lanfranco in Botti’s hometown of Bell Ville, which is about 200 kilometers south of Cordoba. It was there that they performed a few tunes together. They clicked instantly: Lanfranco hails from a more traditional tango tradition that features folkloric music, whereas Botti integrates modern jazz and nuevo tango. Yet they blended seamlessly. Their music caught the attention of many in the audience, which led to the duo performing at the Teatro Coliseo in Argentina on September 8, 2018. The concert was a sold out giant success.

But it was also a somber event. “I realized that it would likely be the last concert that my mother would witness,” said Botti. His mother who had struggled valiantly against cancer was experiencing an advancement of the illness. Tragically and sadly, she passed away just four months after the concert. Wanting to pay tribute and honor his mother, Botti knew what he had to do: record an album that featured music from that seminal concert, the last one where she heard her virtuoso son perform.

Botti and Lanfranco began planning the production in earnest. They poured themselves into selecting the repertoire and crafting sophisticated arrangements. Lanfranco came to New York to record the set, first tracking saxophone and piano, and later the rest of the instruments and vocals in Cordoba, Argentina. “I’m very happy with how the album turned out,” said Botti, who also commended Lanfranco for his remarkable professionalism and for demonstrating maturity beyond his years. “This production is a new path for me, celebrating traditional tango, music which I had never performed, but was always somewhere within me.”

Pure Tango is a blend between the vivid colors that traditional tango offers, with its traditional instrumentation — and the compelling sound of Botti’s saxophone. He brings rich experience to his performances, as he phrases and interprets the melodies with dexterity and elegance. This album balances fresh and modern without losing the vintage sound of the old guard of tango rhythms, arrangements, and repertoire.

Back to Music
Previous Album